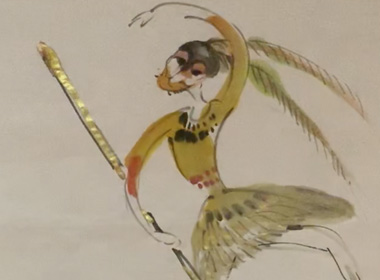 For my sixteenth birthday, in 1966, my elder brother gave me a copy of Si Yeou Ki, and I was fascinated. I read the book, and reread it with the idea of putting it to music. But it took me fifty-three years to embark on the voyage, no doubt because I had to complete my journey as a composer before venturing into the music to accompany the journey of initiation of the Monk Xuanzang (San Ts’ang).

A disciple de Buddha once arrived late for celestial meditation and was duly punished. He has now been reincarnated as a simple monk named Xuanzang. The goddess Guanyin (Kouan Yin) urges him to cross China to reach India and seek out the Scriptures of Truth in the Land of Buddha. This will be a journey of redemption, for the monk and for the three disciples traveling with him.

The first of his three companions on the perilous journey of initiation is the Monkey King, Sun Wukong (the monkey Awakened to Emptiness), the most unruly disciple of the three disciples. While he has the power to cover the distance of 108,000 Lis in one bound, going directly to the Land of the Celestial Bamboo, he must learn the virtue of patience. He is also able to recognize monsters. In the first part of the book (not included in the ballet) Sun Wukong had rebelled against the gods. A ring of gold, controlled by Xuanzang, symbolizes and endows intelligence on the wearer. Two other disciples are there with the Monkey King: Zhu Bajie (Pa Kiai), a lustful glutton, and Sha Wujing (Cha Seng), a docile, introverted character who carries the loads for the others.

By the end of the journey, which involves many trials and tribulations and monsters to be vanquished, they manage, with the help of the goddess Guanyin, to obtain the Scriptures, but they are blank scriptures, for the Truth has been acquired in the course of their journey. They return with scriptures, having been given others of lesser import, so that those expecting scriptures to be brought back are not disappointed. The ballet (of 85 minutes) has been devised as three consecutive sections featuring sixteen of the more than one hundred stages of the journey, each stage offering different levels of interpretation.

My goal was to write music for dance expressing the poetry of the original text and conveying the spiritual elevation achieved by facing the ordeals. The French composer begs indulgence for being so bold as to take on such a monument of Chinese literature.

Xuanzang (San Ts’ang) Has a Dream and Sets Off on His Journey
The Goddess Guanyin tells Xuanzang that he must save Sun Wukong, the Monkey King, who will be his traveling companion on his quest to find the Scriptures of Truth. He must place a ring of gold on his brow to control him.

The Six Bandits
On their way they encounter six bandits, promptly killed by Sun Wukong, incurring the wrath of Xuanzang. In fury, Xuanzang recites the formula of the ring now on the head of Sun Wukong who cries out in pain. Xuanzang releases the hold of the ring, demanding that Sun Wukong pledge obedience to him. They continue on their path.

Winning Over Sha Wujing - Monk Sha (Cha Wou Tsing’s – Cha Seng)
The three travelers reach the banks of the Flowing Sands River. A man-eating monster emerges from the river and attempts to carry off Xuanzang. Zhu Bajie saves him, then turns on the monster who, after a brief struggle, plunges back into the River. Sun Wukong reprimands Zhu Bajie for using the wrong tactics. The monster resurfaces, intent on fighting Zhu Bajie, but flees at the sight of Sun Wukong. The Goddess Guanyin is called on to save them. She commands the monster to surrender and to accompany Xuanzang on his journey. The four travelers continue on their path.

The Temptation of Zhu Bajie
On reaching houses in the shade of a bamboo grove, the travelers are taken in by the Widow Mo and her three daughters. Xuanzang remains steadfast, resisting temptation, but Zhu Bajie succumbs and is caught in the trap of seduction. He is eventually released by his companions. They realize that this was a trial ordained by Guanyin. They resume their journey.

The Manfruit Tree is Felled and Revived, plus Fighting
On the Mountain of Infinite Longevity the travelers reach Wuzhuang Temple. After the ritual on arrival at the temple of the Immortal Zhen Yuan, Xuanzang refuses to eat the precious fruit of the manfruit tree. Zhu Bajie and Sun Wukong steal the fruit and eat it. When Sun Wukong is furious when accused of stealing the fruit, and fells the manfruit tree. Much fighting ensues and divine intervention is needed from Guanyin to revive the Tree.

Sun Wukong’s Triple Murder and Punishment
While Sun Wukong has set off in search of food, an evil spirit in the body of a frail, young maiden appears, intent on capturing and devouring Xuanzang. Sun Wukong returns, recognizes the evil spirit and slays it, but the spirit has just enough time to escape from the body of the young girl. Xuanzang, quite oblivious to the danger, punishes but forgives the spirit. The evil spirit returns, this time in the form of an old woman, and again Sun Wukong slays it. The same attack happens again, this time with an old man, but the spirit cannot escape. Zhu Bajie argues with Xuanzang who dismisses Sun Wukong who goes back to the Mountain of Flowers and Fruit.

The Feat of Magic
Xuanzang and his disciples have come across a group of enslaved monks laboring for Taoist priests. They discover that the King venerates Three Immortals, three Taoist masters who saved them from drought when the Monks had not been able to do so. Since then the Monks have been oppressed and the Taoist priests have enjoyed every privilege. Another drought is threatening, and the King has approved a ritual challenge between the Three Immortals and Xuanzang. Sun Wukong makes a double of himself to stay in place and goes off to call on Mistspreader and Cloudpusher who control the wind and the clouds, Grandfather Thunder and Mother Lightning who command thunder and lighting, and the Dragon Kings who bring rain. He calls on them to block the prayers of Tiger Power, the first Great Immortal. Rain shall only be granted at the express request of Xuanzang. The monks have their rank and reputation restored, and the travelers continue on their path.

The Golden Fish
The Master and his disciples come to the River of Heaven at Night which seems impossible to cross. In a village of the Kingdom of Tarrycart, the people are terrorized at the prospect of the annual sacrifice to the Great King for it includes children. Sun Wukong and Zhu Bajie take the place of the children, then fight the monster covered in fish scales, but it manages to get away. The Goddess Guanyin intervenes, the Golden Fish is captured, and the journey resumes.

Womanland
Arriving in Womanland, Xuanzang and his disciples find a post station. The mistress of ceremonies of Womanland announces to Xuanzang that he is to be the Queen’s husband. Sun Wukong says he should pretend to accept the proposal. They proceed to the Tower of the Five Phoenixes to see the Queen. Before the ceremony, a female monster carries off Xuanzang. His disciples follow in hot pursuit, going all the way to Deadly Foe Mountain. In the first battle, the female monster wounds them with the barb of her tail, and retreats to her cave. Sun Wukong and Zhu Bajie are in agony. The second encounter also ends in failure. They cope across an old woman who is none other than the Goddess Guanyin. She reveals that only the giant rooster can relieve their suffering and vanquish the monster who is a scorpion transformed. The disciples entice the female monster to leave her cave; the giant rooster crows, thus causing her death. The travelers resume their journey.

The Lesser Thunder Monastery
Xuanzang is outside a temple, believing he has reached the Thunder Monastery, and pays no heed to the warnings of Sun Wukong who sees plumes of evil vapor wafting above the roof. The Master and his disciples enter the temple, prostrate themselves and kowtow to the Tathagata, but it is an impostor; Sun Wukong is the only one to see through the impostor. He rushes at him to kill the monster in disguise, but a pair of golden cymbals falls down from above, pinning him to the ground. Zhu Bajie, Sha Wujing and Xuanzang are taken prisoner. Sun Wukong calls on the Spirits and receives assistance from the Twenty- Eight Constellations who help rescue him from the grip of the cymbals. Once he is free, he kills the monster and shatters the cymbals. Xuanzang, Zhu Bajie and Sha Wujing express their gratitude and set off again in quest of the Scriptures.

Weapons of Great Splendor
The travelers reach the prince of Yuhua’s palace. When the three young princes see the disciples, they believe they are monsters, and challenge them. But they are then so impressed by the power of their weapons that they ask to be their students. Once they have learned the skills, lighter versions of the three weapons are made and left with them. In the middle of the night the Tawny Lion steals the weapons. The three disciples go to Tigermouth Cave where Sun Wukong, in disguise, retrieves the weapons. They then fight Tawny Lion who flees. The Great Sage helps the disciples capture the Nine-Headed Lion who had rallied to help the Tawny Lion. The King and the three princes thank the Master and his disciples who then resume their journey.

Arriving at the Great Thunder Monastery to Fetch the Scriptures
At the river, which is the last obstacle to overcome before reaching the Great Thunder Monastery, Xuanzang notices that the boat the ferryman has brought is bottomless. Sun Wukong pushes his Master on board, and the three disciples hang on to the vessel. As the boat moves away from the bank, a corpse drifts past. Sun Wukong exclaims that it is the Master freed from his mortal trappings, and they all applaud. The travelers finally reach the Mahavira Hall of the Monastery. They prostrate themselves and kowtow to the Tathagata. Xuanzang hands over their passports. Two arhats present them with the Scriptures. The Master and his disciples thank them and leave the Monastery. Guanyin realizes that the travelers must accomplish one final ordeal, so sends the vajrapanis to stop them, causing the Scriptures to fall to the ground. The disciples discover that they are blank, with no script, for the Truth resides in their journey. The travelers hastily return to the Monastery and request other Scriptures, albeit less pure, for they are needed to show to the people waiting for them to return with written Scriptures. They express their thanks and take their leave, flying off on the wind. The wind which swept them away has dropped and they fall to the ground on the banks of a river. They are attacked by evil demons trying to steal the Scriptures. While the demons are defeated, the final roll of Scripture has stuck to a rock, but it cannot be deciphered.

The Travelers Reach Ch’angan and Enter into the Western Heaven.
The travelers arrive in Ch’angan and present the Scriptures to the Emperor. They call on the Tathagata. Xuanzang and Sun Wukong, who has been released from the golden ring, are promoted to high office as Buddhas. 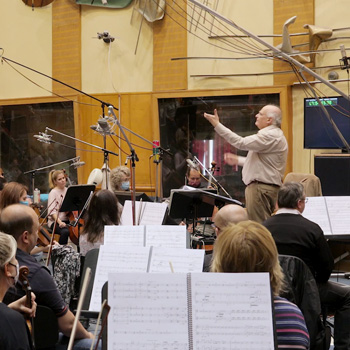 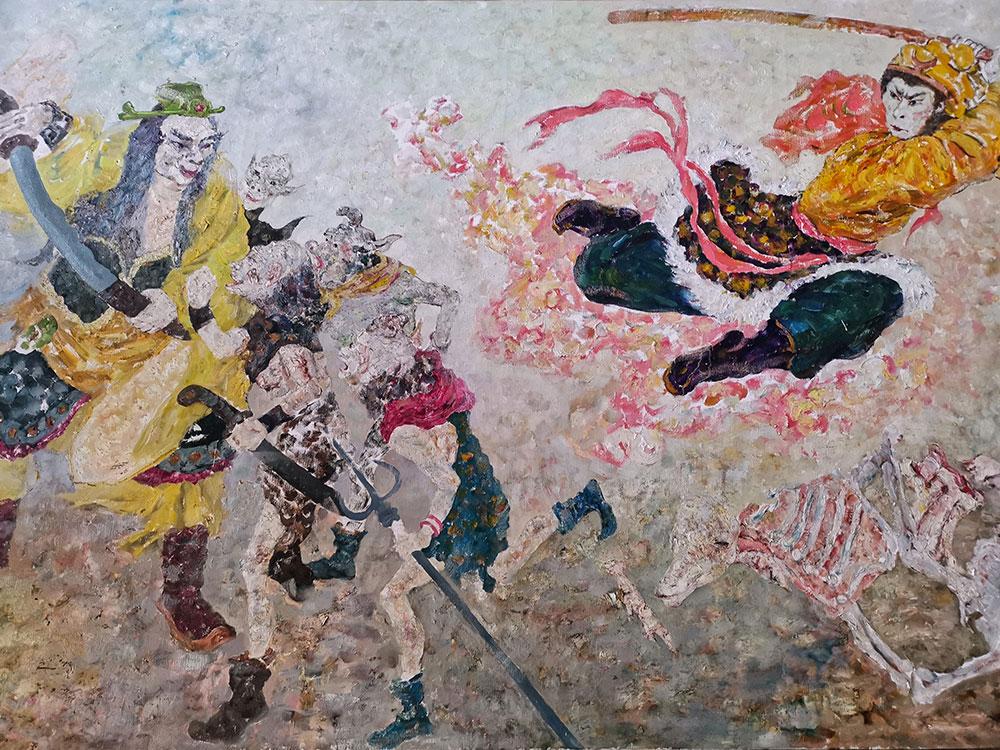 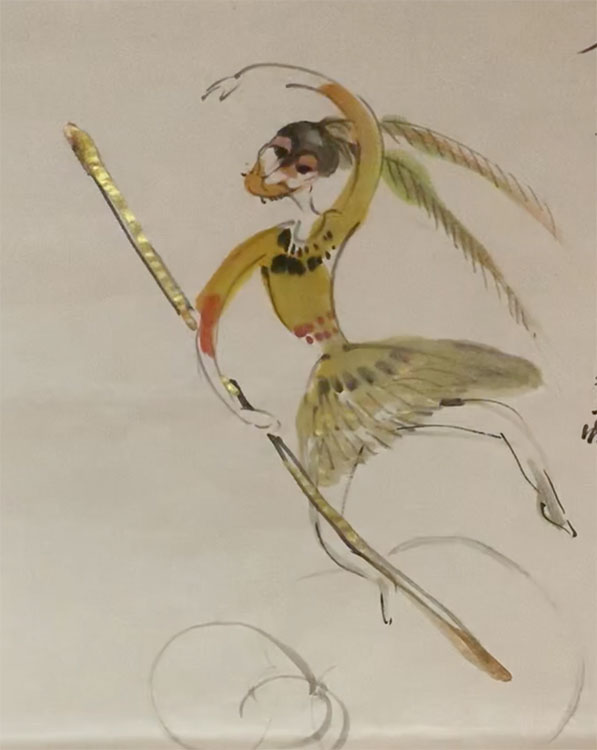 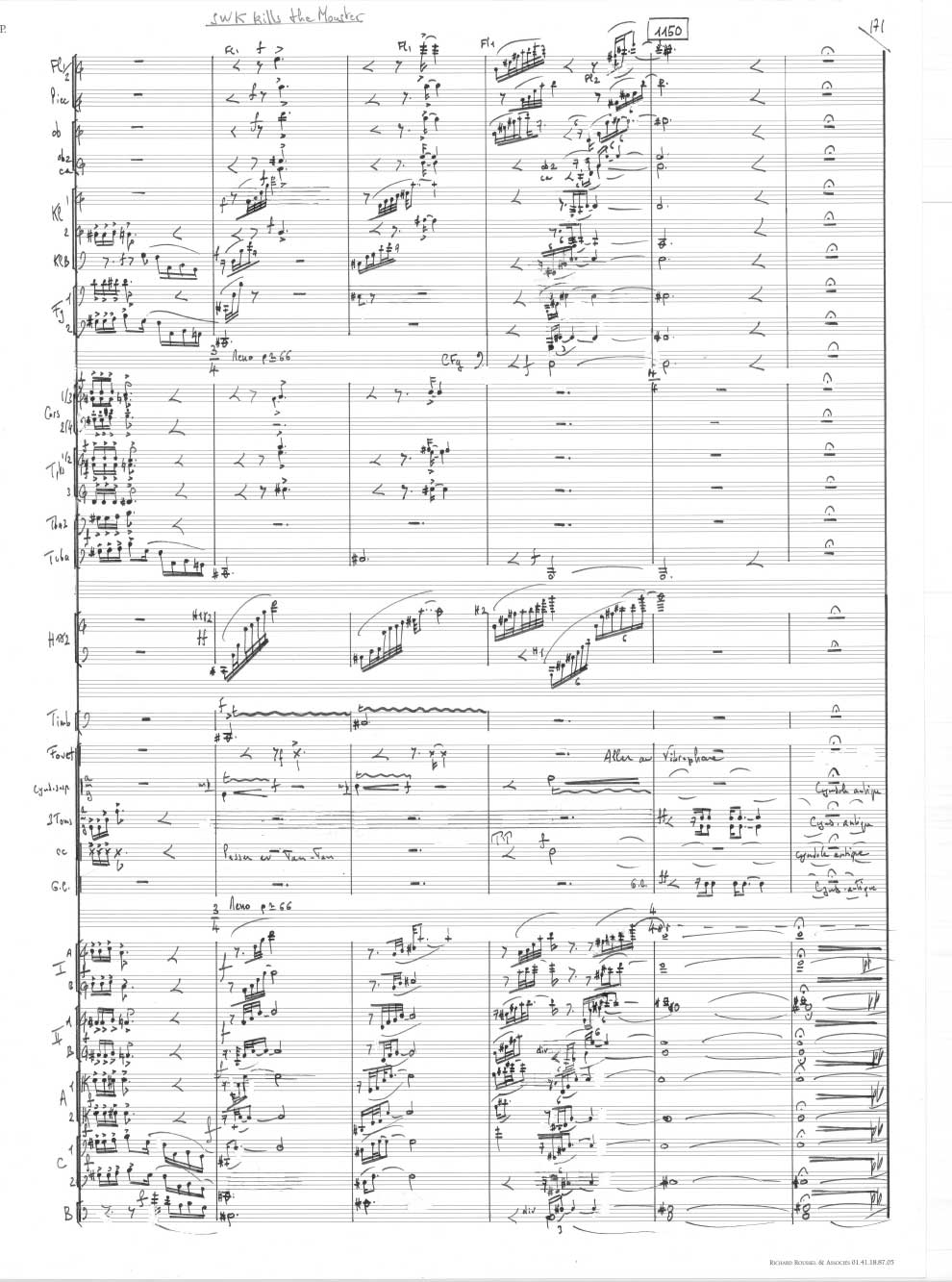